My grandparents are visiting from Sweden this month, and last weekend we decided to take a short road trip up to Minnesota. We started at the American Swedish Institute, a museum that has a Swedish style restaurant called Fika. I prepared myself to not have many options because at Fika they focus on ‘traditional’ Swedish cuisine which tends to be very diary and meat heavy. However, they have this avocado toast with sprouts, green tomatoes and seeds on this hearty rye bread. It was FANTASTIC!

The rest of the visit was spent driving around these small lake towns in search of the historic markers of the first Swedes that immigrated to Minnesota. My family is a bit obsessed with the book series The Emigrants an excellent series written by Swedish author Vilhem Moberg about a family that emigrates from Sweden in the 1850s and the struggles of the journey and then life as a immigrant in a new country. As a first generation American with Swedish heritage, this series has always had a special place in my heart.

This trip centered around visiting the places that play homage to this story, there is a statues of the fictional characters from the series, a statue of the author who visited the place. We visited small museums, statues and spent hours looking for coffee, with not much luck, (which is not very Swedish). 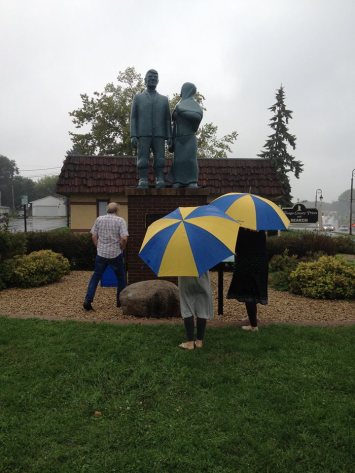 Looking like real tourists at the statue of Karl-Oskar and Kristina.

Checking out the St.Croix river in Stillwater.

My grandparents posing next the the statue of Vilhem Moberg.

The last morning was spent in downtown Minneapolis at the Walker Art Center sculpture garden.  We finished with a quick lunch at Esker Grove before hitting the road back to Nebraska.

All in all, i had two great meals while on the trip. The rest of the time I had pretty basic salads and fries. I probably could have gotten more than that at some of the places we were at, but I still get shy when in restaurants in small towns. I know that Minneapolis has a ton to offer in terms of vegan friendly, but I didn’t plan ahead, and I was not in charge of where we went during this trip. I grabbed a few vega premade shakes and threw them in my purse along with granola bars, so I never went hungry.

Minnesota you were lovely, Minneapolis I will be back soon just to try out all the vegan places.